Under freedom of information, the Scottish Government has published details of 65,060 successful delay repay claims. It also detailed the number of payments made by 4 week period, the worst of which saw 15,683 claims paid out in a single month and another saw 10,865 claims in a month.

The last few months have seen ScotRail’s performance at the lowest it has been during the franchise and the Scottish Government has waived penalties for Abellio until June 2019.

“The volume of delay repay claims ScotRail had to pay out this year is astonishing. It shows just how dismal rail performance and punctuality has been.

“This only accounts for those who go through the process of applying for a refund. There must be many thousands more who have been similarly inconvenienced but not claimed.

“Passengers just want trains to be reliable and value for money but recently they’ve been getting neither. The Transport Secretary must address the catalogue of errors that are holding up Scottish passengers.”

The Scottish Government has published the number of ‘delay repay’ payments made by ScotRail between January and September 2018 here. A breakdown was provided by four-week reporting period (of which there are 13 in a year), with period 1 starting 1 April: 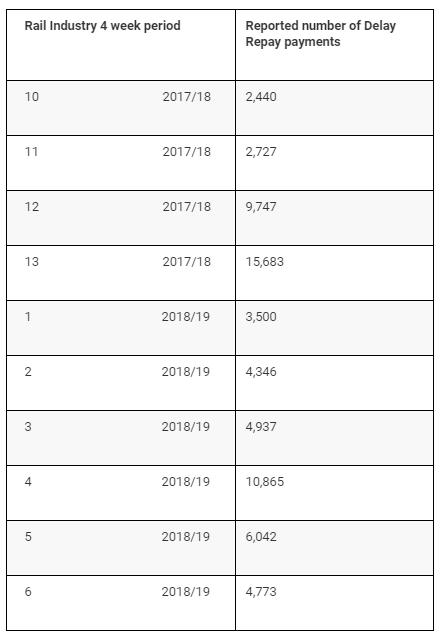